Perfect plants for your busy teenager

Teenagers live life in the fast lane. They are busy finding themselves, while at the same time their surroundings are making lots of demands on them. Give your teenager a plant which will suit their universe, and help him or her to gain a little more peace of mind without imposing additional demands. 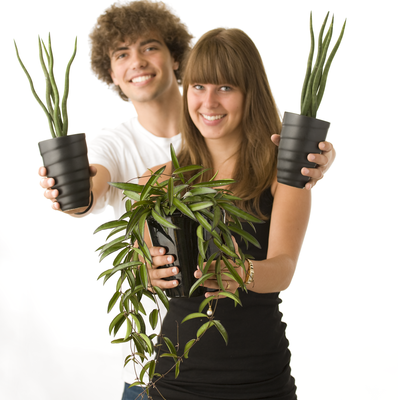 Retro consumption and security among teenagers
"In recent years we have seen a kind of nostalgic consumption, or 'retro consumption', among young people, who find a certain degree of comfort in things which have been consumed in the past, and therefore offer a different kind of story," says Erik Sloth, a researcher into consumption and society at the Aarhus School of Business, Aarhus University.

"It might be recycled clothes or an old wooden beer crate that suddenly acquire a renaissance in the teenager's room, but it could as easily be a special plant, such as 'mother-in-law's tongue', hydrangea or cactus, which they remember from visits to the grandparents."

Feminine and masculine plants
Girls are always interested in decorating their rooms and focus mainly on flowers, while for boys it is the more masculine plants such as cactus. Fortunately, there are a wealth of plants that require minimal care, because it is hard work being a sixteen-year-old.

"Stress is now also a growing problem among the younger age groups. They are in the middle of an identity crisis, and through their consumption, they try to create small 'islands' in their lives where they can relax," continues Erik Sloth, who feels that stress symptoms are seen among teens because they live in a vortex in which they are forced to constantly reflect on who they are, what they want, and what choices they should make.

"They have to cope with demands from school while at the same time watching what their friends are doing - and this applies both on Facebook, on their mobile phones, and in real life. They don't want to miss out on anything, and in the long run this is naturally stressful."

Give your teenager a plant
So make your teen happy by giving him or her a plant that requires no extra effort, but just offers a good experience.