Danish plants in the front row

For the fifth consecutive year, the Danish plant industry′s coveted innovation prize, the Floradania Innovation Awards, will be presented at the world's biggest plant fair, IPM in Germany 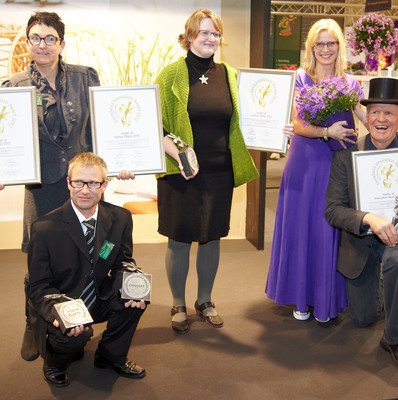 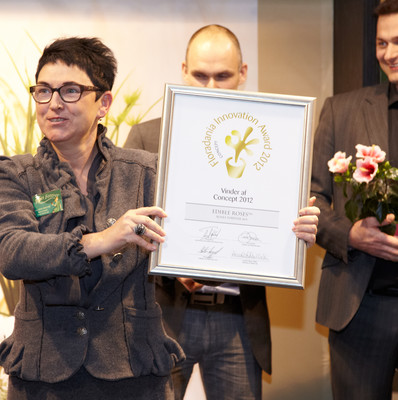 At yesterday's event, Danish growers convincingly demonstrated that they are capable of making their mark on the global plant stage. In the presence of the international press, as well as buyers from all over the world and their grower colleagues, the winners were accorded due recognition for their great innovative drive and unfailing willingness to invest in new products and processes.

Indoor - scent and X-factor
The winner in the Indoor category was Infinity Rose TM from the Roses Forever nursery, by Rosa and Harley Eskelund.

The rose is a classic flower that once again revealed a new side here, with an X-factor in the form of large, fragrant flowers, beautiful, strong leaves and stems, and high durability, which greatly impressed the judges.

The Roses Forever nursery has previously won the Danish innovation award in 2011 and 2008, and has on several occasions brought international awards home to Denmark.

Outdoor - a royal choice
The winner in the Outdoor category was a clover, or Trifolium, from the Råhøj nursery, and was named after the youngest daughter of the Crown Prince and Princess, 'Josephine′.

The judges emphasised the plant's beautiful expression, with its fine designs and bright leaf colours, as well as its long period of use from early spring to late autumn. It is also ideal for bouquets and other flower binding.

The Råhøj nursery, run by Malene and Bent Juhl Jensen, has also previously won a prize in the Floradania Innovation Awards, namely in 2009.

Concept - roses on the menu
In the third category, Rosa Eskelund had to mount the podium once again to receive the award for best new concept: edible roses, available both as whole plants, and cut and packaged, ready for use. It was the product′s great novelty value and marketing and commercial potential that led to the decision of the judges. The many uses of the plant were also emphasised.

So there is plenty to look forward to the coming plant season, when Danish and European consumers can quite literally savour the sight, scent and taste of these plants.

For further information, please contact:
Floradania Marketing, tel. +45 6592 6266 or e-mail marketing@floradania.dk. You can read more about the winners and the other nominees at: www.floradania.dk under "News".

Facts:
The Danish Floradania Innovation Awards are presented in the categories "Indoor", "Outdoor" and "Concepts", and are intended to reward innovation among Danish horticulturalists.
The awards are presented in January every year at the world's largest horticultural trade fair in Essen, Germany.
Every year, Denmark produces around 600 million plants, of which approximately 70% are exported.